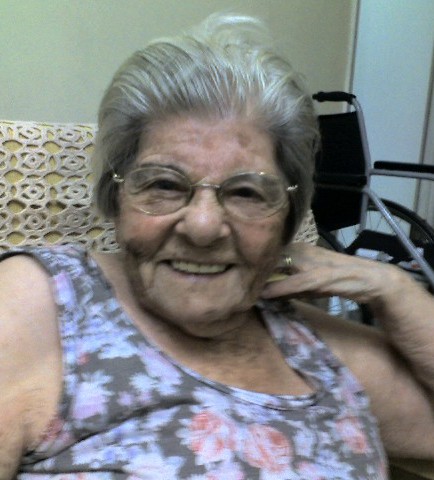 Astronomy Picture of the Day

Discover the cosmos! Each day a different image or photograph of our fascinating universe is featured, along with a brief explanation written by a professional astronomer.
2016 January 25 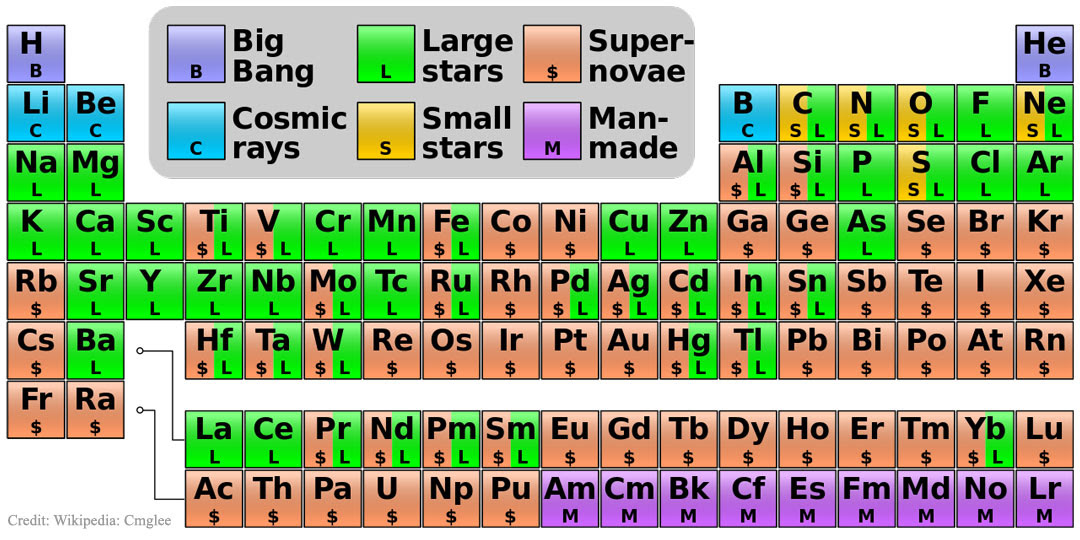 Where Your Elements Came From
Image Credit: Cmglee (Own work) CC BY-SA 3.0 or GFDL, via Wikimedia Commons
Explanation: The hydrogen in your body, present in every molecule of water, came from the Big Bang. There are no other appreciable sources of hydrogen in the universe. The carbon in your body was made by nuclear fusion in the interior of stars, as was the oxygen. Much of the iron in your body was made during supernovas of stars that occurred long ago and far away. The gold in your jewelry was likely made from neutron stars during collisions that may have been visible as short-duration gamma-ray bursts. Elements like phosphorus and copper are present in our bodies in only small amounts but are essential to the functioning of all known life. The featured periodic table is color coded to indicate humanity's best guess as to the nuclear origin of all known elements. The sites of nuclear creation of some elements, such as copper, are not really well known and are continuing topics of observational and computational research.
Posted by Aloyzio Achutti at 9:24 AM No comments:

The topics in this series were developed by New Scientist in conjunction with Philips, which paid for them to be produced
IF YOU have ever had to stay on a hospital ward, you will know how stressful it can be, no
matter how caring and professional the medical staff. Besides the boredom and loneliness,
there’s the noise and lack of privacy.
Help is at hand, however, as a new type of hospital ward is beginning to open its doors.
The difference is that in this ward, patients stay at home. The idea is to use the home as a
“virtual” ward. Instead of staying in hospital longer than is strictly necessary, people go
home to recover once they are out of danger.
But out of sight does not mean out of mind: medical teams still visit regularly – perhaps to
re-dress wounds, give injections, provide physiotherapy or check blood pressure. And more
high-tech virtual wards can use advanced telehealth devices, meaning people are issued with
innovative wireless sensors that track their vital signs. These devices can continually feed
data to cloud-based services, where predictive algorithms issue alerts if someone seems to
be at risk of a serious health event, such as a heart attack. In this case, an emergency team
can speed to the person’s home to intervene.
Virtual wards allow people to monitor the parameters relevant to such conditions using a
variety of wireless vital-sign monitors that communicate with a tablet computer via Bluetooth.
The sensors include blood pressure cuffs, blood glucose level meters, pulse oximeters that
measure blood oxygen levels, heart rate monitors and even wireless weight and body fat scales./.../
Posted by Aloyzio Achutti at 5:52 PM No comments:

A protein in the brain may hold a key to slowing progression of Alzheimer's disease, a new study suggests.

And boosting this protein might be as simple as increasing exercise and social activity, experts say.

The protein is encoded by a gene called brain-derived neurotrophic factor, or BDNF.

Researchers found that seniors with the highest levels of BDNF gene function had a 50 percent slower loss of memory and thinking than those with the lowest levels.

"What is cool about this study is that we have shown that BDNF, which is involved in brain cell survival, may protect against dementia," said lead researcher Dr. Aron Buchman. He is a professor in the department of neurological sciences at Rush University Medical Center in Chicago.

To study the effect of BDNF on dementia, Buchman's team followed 535 people, average age 81, until death.

Over an average of six years, the researchers tested participants' thinking and memory skills annually. After death, they examined BDNF levels in the brain. They then compared the two sets of results to see how BDNF levels might be associated with a decline in memory and thinking skills.

Even people with the most plaques and tangles but the highest levels of BDNF had slower mental decline compared with those with the lowest amount of BDNF, the researchers found.

The report was published Jan. 27 online in the journal Neurology.

Michal Schnaider Beeri, an associate professor of psychiatry at the Icahn School of Medicine at Mount Sinai in New York City, viewed the results more cautiously.

The new study shows an association between BDNF and slower mental decline, not that this protein was the cause of that slowing, said Beeri, who wrote an accompanying journal editorial.

Still, this study may be a step in "thinking about how we can change the course of Alzheimer's disease to something milder," Beeri said.

Existing drugs to treat Alzheimer's aren't very effective, Beeri added. "There might be new medications in the future that increase levels of BDNF and may possibly decrease the rate of decline in Alzheimer's disease," she said.

If borne out in additional research, Buchman thinks these findings may usher in a "whole different approach to aging." Traditionally, researchers have been looking for ways to treat plaques and tangles in the brain and other ravages of Alzheimer's disease. "That hasn't gone so well," he said.

Buchman's idea focuses on increasing the amount of the brain's BDNF. "That may be a way of treating and slowing the rate of mental decline even if we can't get rid of the Alzheimer's disease pathology in the brain," he said.

It is not known why one person naturally has high levels of BDNF and another doesn't, Buchman said.

However, studies have found that purpose in life, social interaction, education and exercise may boost levels of BDNF and "could provide some protection against Alzheimer's pathology," he said.

The next step is to find a way to raise BDNF levels, Buchman said. It might be a drug or a change in behavior. But, at what age that lifestyle change must start or what the effects of a drug might be are unknowns, he said.

Beeri pointed out that exercise has been shown to increase levels of BDNF in the blood, but said a relationship between BDNF protein levels in the blood and in the brain hasn't been established.

Prospective epidemiologic studies have identified several risk factors for heart disease, and most can be the target of risk reduction interventions. The most widely recognized risk factors for atherosclerotic cardiovascular disease (ASCVD) include age, gender, cigarette smoking, sedentary lifestyle, elevated LDL, reduced HDL, hypertension, and diabetes. The consistency of associations between these factors and ASCVD risk across populations is substantial. Our understanding of the pathogenesis and etiology of coronary ASCVD, as well as its clinical implications, has grown tremendously over the past 20 y. The role garlic might play in treating ASCVD has been postulated for many years, but until recently no studies on garlic's ability to inhibit the atherosclerotic process have been reported. A pilot study evaluating coronary artery calcification and the effect of garlic therapy in a group of patients who were also on statin therapy suggested incremental benefits. The implications of this study must be put in context of the potential importance of early atherosclerosis detection and prevention./.../
*********************