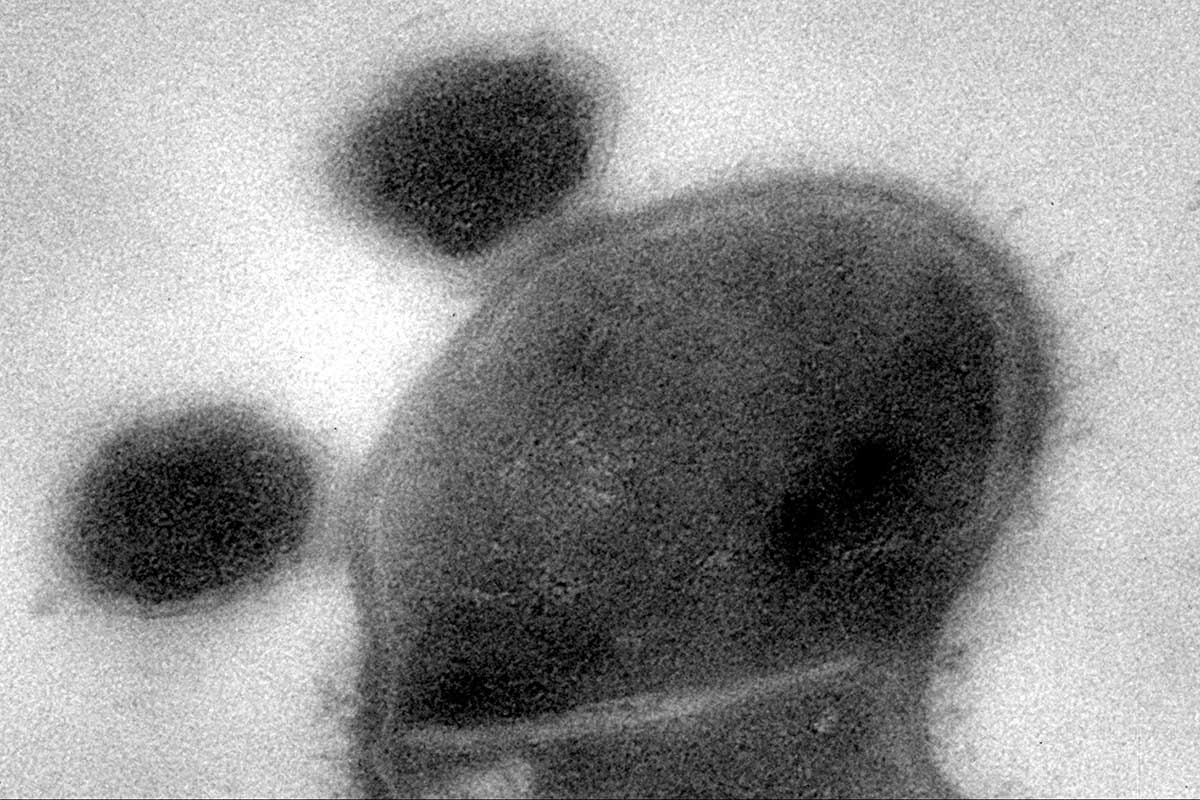 438 DAILY NEWS 23 June 2016 New life form discovered in saliva is linked to human disease [image: Attack of the microbes] Attack of the microbes Jeffrey S. McLean By Andy Coghlan Parasitic bacteria that are entirely dependent on the other bacteria they infect have been discovered for the first time, in human spit. The tiny cells have gone undetected for decades, but appear to be linked to gum disease, cystic fibrosis and antimicrobial resistance. We only know of one other strain of bacteria that can infect other bacteria, but this type, called *Bdellovibrio*, is a free-living cell th... mais » 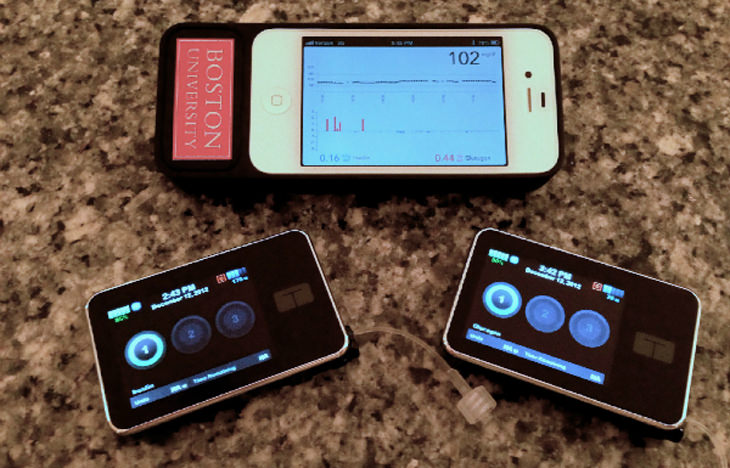 Aloyzio AchuttiemAMICOR - Há 31 minutosVolume 3, No. 7, p593–595, July 2016 Comment Depression in old age—the first step to dementia? Simone Reppermund[image: email] Published Online: 29 April 2016 [image: Article has an altmetric score of 115] DOI: http://dx.doi.org/10.1016/S2215-0366(16)30022-0 Article Info - Summary - Full Text - Tables and Figures - References [image: First page of article] A better understanding of the link between depression and dementia is essential, given the rapid growth of the elderly population, with an anticipated doubling of global dementia prevalence every 20 years.1 In the *Lancet ... mais »

Why Butter Isn’t So Bad A new study found no link between eating butter and heart disease, going against longstanding advice to avoid butter because it contains saturated fat It looks like butter may, in fact, be back. The creamy condiment is a “middle-of-the-road” food, nutritionally speaking—better than sugar, worse than olive oil—according to a new report, which adds to a growing body of research showing that the low-fat-diet trend was misguided. The new study analyzed nine papers that included more than 600,000 people and concluded that consuming butter is not linked to a hi... mais »

Aloyzio AchuttiemAMICOR - Há 12 horas
Home Electrophysiology Motivation to Bully is Regulated by Brain’s Reward Circuits NEUROSCIENCE NEWSJUNE 29, 2016 *Summary: Researchers report bullying behavior activates primary reward circuits in the brain, making it a pleasurable behavior to a certain subset of individuals.* *Source: Mount Sinai Hospital.* *Individual differences in the motivation to engage in or to avoid aggressive social interaction (bullying) are mediated by the basal forebrain, lateral habenula circuit in the brain, according to a study conducted at the Icahn School of Medicine at Mount Sinai and published June ... mais »

‘Holy grail’ of breast-cancer prevention in high-risk women may be in sight June 21, 2016 [image: Breast cancer prevention (credit: Walter and Eliza Hall Institute)] Australian researchers have discovered that an existing medication could have promise in preventing breast cancer in women carrying a faulty BRCA1 gene, who are at high risk of developing aggressive breast cancer. Currently, many women with this mutation choose surgical removal of breast tissue and ovaries to reduce their chance of developing breast and ovarian cancer. … more…

Brain markers of numeric, verbal, and spatial reasoning abilities found June 23, 2016 [image: A new study found that higher concentrations of NAA (N-acetyl aspartate) in the medial parietal and posterior cingulate cortices of the brain were associated with better performance on verbal and spatial tests. NAA is a byproduct of glucose metabolism and an indicator of brain health. (credit: Graphic by Julie McMahon and Erick Paul)] A new study helps explain how brain structure and chemistry relate to “fluid intelligence” — the ability to adapt to new situations and solve problems one has... mais » 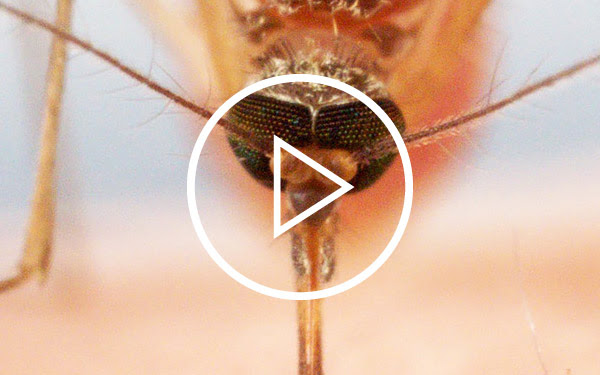 VIDEO What makes mosquitoes so good at getting under our skin? 3 minutes

Unexpected discovery reveals secret of how cancer spreads in the body June 23, 2016 [image: primary tumor (credit: Barts Cancer Institute, QMUL)] Could help develop treatments to prevent metastasis (awesome animated video) Metastasis (spread of cancer) is one of the biggest challenges in cancer treatment. It is often not the original tumor that kills, but secondary growths. But a key question in cancer research has been how vulnerable cancer cells are able to survive once they break away from a tumor to spread around the body. “Metastasis …more…

How exercise improves memory June 24, 2016 [image: Exercise induces synthesis of a chemical called DBHB in the liver. In the hippocampus, DBHB induces Bdnf expression, which in turn has positive effects on memory, cognition and synaptic transmission. (credit: Sama F. Sleiman et al./eLife)] The hippocampus in the brain switches to fat as an energy source after glucose is depleted from exercise), leading to release of BDNF, associated with cognitive improvement. Researchers have found out how. Physical exercise after learning improves memory and memory traces if the exercise is done ... mais »

Aloyzio AchuttiemAMICOR - Há 4 dias
Testing The Theory of How Rods in the Retina Originated NEUROSCIENCE NEWSJUNE 20, 2016 *Summary: A new study reports the retinas from our earliest vertebrate ancestors had cone like receptors, allowing them to see both in daylight and at night.* *Source: NIH/National Eye Institute.* *Genesis of our rod-dominant retina may explain ancestors’ survival through ‘nocturnal bottleneck’.* [image: Image shows rods and cones in the retina.] This is a confocal microscope image of rod and cone photoreceptors in a human retina. Fluorescent probes have been used to identify rod photoreceptors (gree... mais »

Aloyzio AchuttiemAMICOR - Há 4 dias
Exploring the Epigenetic Influences of Chronic Pain NEUROSCIENCE NEWSJUNE 26, 2016 *Summary: According to new research, one protein can regulate the expression of a large number of genes that modulate pain.* *Source: Drexel University.* *Chronic pain is one of the most prevalent, disabling and expensive public health crises in the United States. It affects more than 100 million Americans, with annual costs estimated at $635 billion, says a 2014 report from the American Pain Society.* Despite the enormous societal impact of chronic pain, present treatment options are limited to nonstero...mais »

Aloyzio AchuttiemAMICOR - Há 4 dias
'Pronoia' and other emotions you never knew you had By Melissa Dahl, Science of Us Updated 1315 GMT (2115 HKT) June 24, 2016 In recent years, neuroscience has introduced a new way of thinking about our emotions. The scientists behind the latest brain-imaging studies say they can now pinpoint with precision where these feelings are located within our heads. In 2013, for instance, a team of psychologistspublished a study in which they claimed that they had found neural correlates for nine very distinct human emotions: anger, disgust, envy, fear, happiness, lust, pride, sadness, and shame.
Posted by Aloyzio Achutti at 10:29 PM No comments: 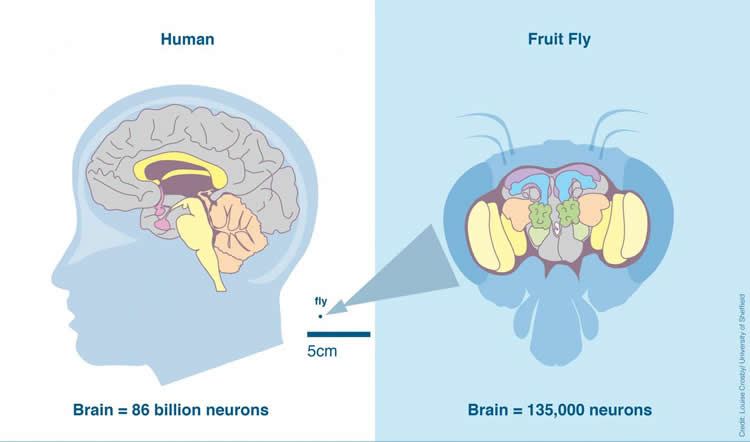 
By Andy Coghlan
Parasitic bacteria that are entirely dependent on the other bacteria they infect have been discovered for the first time, in human spit. The tiny cells have gone undetected for decades, but appear to be linked to gum disease, cystic fibrosis and antimicrobial resistance.
We only know of one other strain of bacteria that can infect other bacteria, but this type, called Bdellovibrio, is a free-living cell that hunts down its prey. The newly discovered organism has very few genes and is dependent entirely on its host.
The parasite, which appears to make its host more harmful to humans, evaded our detection until now because it is difficult to grow and study in the laboratory.
“They’re ultra-small bacteria, and live on the surface of other bacteria,” Jeff McLean of the University of Washington School of Dentistry in Seattle told the annual meeting of the American Society for Microbiology in Boston, Massachusetts, last week.

Unlike any known species

McLean and his colleagues discovered the organisms by searching for bacterial strains in human saliva samples. Analysing the DNA of all the species they managed to grow from these samples, they came across a mystery fragment of genetic material. This piece of RNA had been discovered by other researchers before, but no one could tell what organism it came from.
McLean’s team has now shown that this RNA belongs to a bacterium that lives on another species, Actinomyces odontolyticus. When the researchers viewed this species under the microscope, they found that the cells were covered with much smaller bacteria – the first species ever discovered to parasitise another bacterium.
At first, Actinomyces is able to tolerate the parasites, which attach themselves to its outer membrane, drawing nutrients out of their host.
“Later, they start attacking and killing the host,” said McLean. Towards the end of the infection process, holes seem to form in the membrane of the Actinomyces cell and its contents gush out. “We’re trying to decipher what’s going on,” he said.
The parasitic bacterium is unlike any previously known species. It has just 700 genes and is the first bacterial strain identified that cannot make its own amino acids – the building blocks for the proteins essential to life – but depends instead on a supply from its host. By comparison, A. odontolyticus has 2200 genes.

Tip of the iceberg

This discovery explains why the species has never been seen before: it can only be grown in the laboratory alongside a host. McLean suspects A. odontolyticus is not this parasite’s only host, and that many other types of tiny parasitic bacteria may exist.
“This microbe is clearly the tip of the iceberg,” suggests Roland Hatzenpichler of the California Institute of Technology in Pasadena.
“It’s incredibly exciting to see such a major advancement in the study of major lineages of life that until now have been impossible to cultivate,” says Brian Hedlund of the University of Nevada, Las Vegas. “Gene data from other as-yet uncultivated organisms suggests that host-parasite relationships between microbes are common in nature, so this type of study is a great template for others to follow.”

We might find that these species have an important role in human diseases. McClean says he has found high concentrations of the new bacterium’s DNA in people who have gum disease or cystic fibrosis.
Actinomyces bacteria are known to contribute to gum disease, but are usually kept under control by white blood cells called macrophages, which engulf and destroy them. McLean says he has evidence that when these bacteria are infected with the parasite, they can evade these macrophages and make gum disease worse.
In previous work, the team had identified a type of bacterium that infects some members of the archaea – a different type of single-celled life that is genetically distinct from bacteria, but similar in its lack of a true cell nucleus and other complex cell machinery.
The two parasitic bacteria also both somehow make their host cells become resistant to the antibiotic streptomycin – another finding that may prove important in the midst of our present antimicrobial-resistance crisis.
Read more: Biology’s ‘dark matter’ hints at fourth domain of
Posted by Aloyzio Achutti at 2:51 PM No comments: 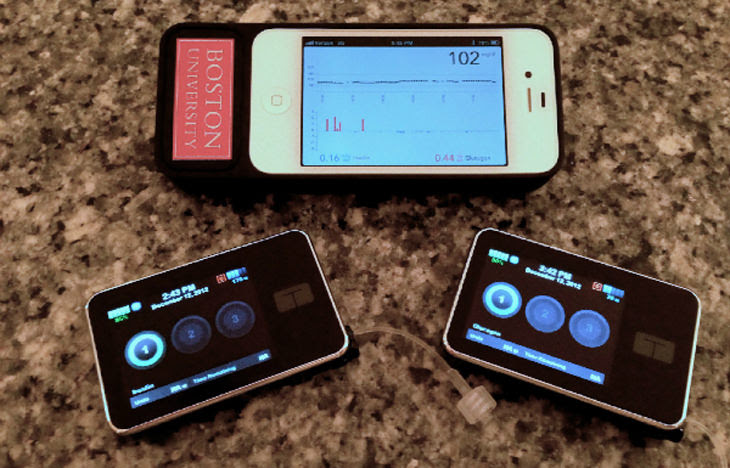 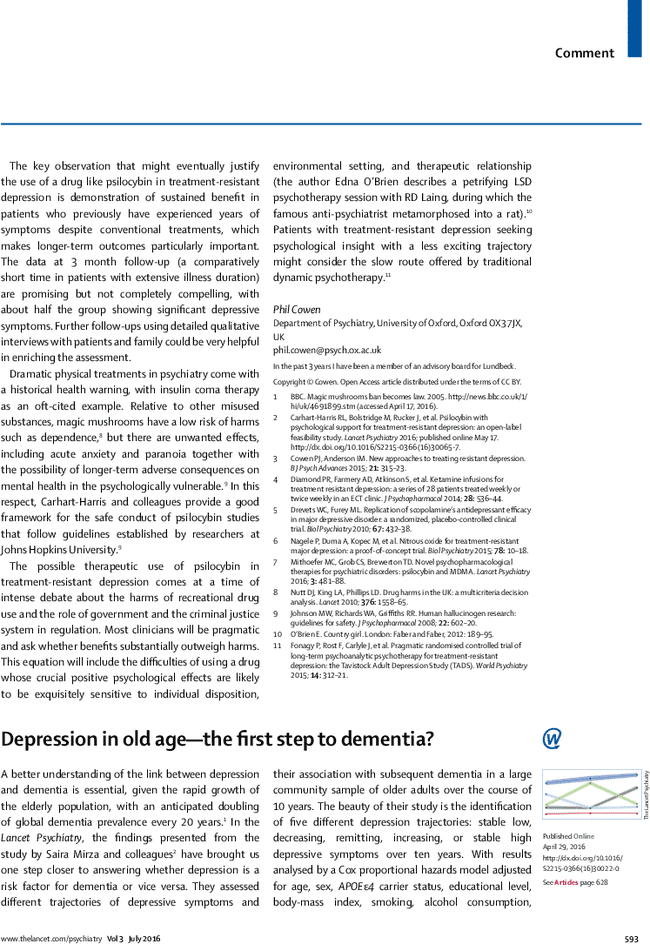 A better understanding of the link between depression and dementia is essential, given the rapid growth of the elderly population, with an anticipated doubling of global dementia prevalence every 20 years.1 In the Lancet Psychiatry, the findings presented from the study by Saira Mirza and colleagues2 have brought us one step closer to answering whether depression is a risk factor for dementia or vice versa. They assessed different trajectories of depressive symptoms and their association with subsequent dementia in a large community sample of older adults over the course of 10 years.

10-year trajectories of depressive symptoms and risk of dementia: a population-based study

Late-life depressive symptoms have been extensively studied for their relationship with incident dementia, but have been typically assessed at a single timepoint. Such an approach neglects the course of depression, which, given its remitting and relapsing nature, might provide further insights into the complex association of depression with dementia. We therefore repeatedly measured depressive symptoms in a population of adults over a decade to study the subsequent risk of dementia.
Posted by Aloyzio Achutti at 10:34 AM No comments: