Long before symptoms like memory loss even emerge, the underlying pathology of Alzheimer’s disease, such as an accumulation of amyloid protein plaques, is well underway in the brain. A longtime goal of the field has been to understand where it starts so that future interventions could begin there.
A new study by MIT neuroscientists at The Picower Institute for Learning and Memory could help those efforts by pinpointing the regions with the earliest emergence of amyloid in the brain of a prominent mouse model of the disease. Notably, the study also shows that the degree of amyloid accumulation in one of those same regions of the human brain correlates strongly with the progression of the disease.
“Alzheimer’s is a neurodegenerative disease so in the end you can see a lot of neuron loss,” said Wen-Chin “Brian” Huang, co-lead author of the study and a postdoc in the lab of co-senior author Li-Huei Tsai, Picower Professor of Neuroscience and director of the Picower Institute. “At that point it would be hard to cure the symptoms. It’s really critical to understand what circuits and regions show neuronal dysfunction early in the disease. This will in turn facilitate the development of effective therapeutics.”
In addition to Huang, the study’s co-lead authors are Rebecca Canter, a former member of the Tsai lab, and Heejin Choi, a former member of the lab of co-senior author Kwanghun Chung, associate professor of chemical engineering and a member of the Picower Institute and the Institute for Medical Engineering and Science.
Tracking plaques
Many research groups have made progress in recent years by tracing amyloid’s path in the brain using technologies such as positron emission tomography and by looking at brains post-mortem, but the new study in Communications Biology adds substantial new evidence from the 5XFAD mouse model because it presents an unbiased look at the entire brain as early as one month of age. The study reveals that amyloid begins its terrible march in deep brain regions such as the mammillary body, the lateral septum and the subiculum before making its way along specific brain circuits that ultimately lead it to the hippocampus, a key region for memory, and the cortex, a key region for cognition.
The team used SWITCH, a technology developed by Chung, to label amyloid plaques and to clarify the whole brains of 5XFAD mice so that they could be imaged in fine detail at different ages. The team was consistently able to see that plaques first emerged in the deep brain structures and then tracked along circuits such as the Papez memory circuit to spread throughout the brain by 6-12 months (a mouse’s lifespan is up to three years).
The findings help to cement an understanding that has been harder to obtain from human brains, Huang said, because post-mortem dissection cannot easily account for how the disease developed over time and PET scans don’t offer the kind of resolution the new study provides from the mice.
Key validations
Importantly, the team directly validated a key prediction of their mouse findings in human tissue: If the mammillary body is indeed a very early place that amyloid plaques emerge, then the density of those plaques should increase in proportion with how far advanced the disease is. Sure enough, when the team used SWITCH to examine the mammillary bodies of post-mortem human brains at different stages of the disease, they saw exactly that relationship: The later the stage, the more densely plaque-packed the mammillary body was.
“This suggests that human brain alterations in Alzheimer’s disease look similar to what we observe in mouse,” the authors wrote. “Thus we propose that amyloid-beta deposits start in susceptible subcortical structures and spread to increasingly complex memory and cognitive networks with age.”
The team also performed experiments to determine whether the accumulation of plaques they observed were of real disease-related consequence for neurons in affected regions. One of the hallmarks of Alzheimer’s disease is a vicious cycle in which amyloid makes neurons too easily excited and overexcitement causes neurons to produce more amyloid. The team measured the excitability of neurons in the mammillary body of 5XFAD mice and found they were more excitable than otherwise similar mice that did not harbor the 5XFAD set of genetic alterations.
In a preview of a potential future therapeutic strategy, when the researchers used a genetic approach to silence the neurons in the mammillary body of some 5XFAD mice but left neurons in others unaffected, the mice with silenced neurons produced less amyloid.
While the study findings help explain much about how amyloid spreads in the brain over space and time, they also raise new questions, Huang said. How might the mammillary body affect memory and what types of cells are most affected there?
“This study sets a stage for further investigation of how dysfunction in these brain regions and circuits contributes to the symptoms of Alzheimer’s disease,” he said.
Source: picower.mit.edu
#alzheimer's disease#amyloid plaques#neurodegeneration#5XFAD#neuroscience#science
Posted by Aloyzio Achutti at 11:06 PM No comments:

The Fundamental Theorem of Calculus

Maths and Musings
Jun 27 · 12 min read
The beginner’s guide to proving the Fundamental Theorem of Calculus, with both a visual approach for those less keen on algebra, and an algebraic, slightly more rigorous approach, for those keen on exactness.
By the end, I hope you feel a bit more like a mathematician :)
Posted by Aloyzio Achutti at 11:22 AM No comments: 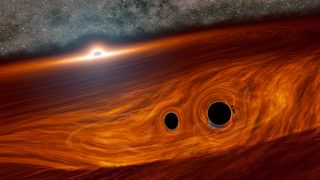 An artist's depiction of two black holes merging within the disk of a supermassive black hole, later releasing a burst of light.
(Image: © Caltech/R. Hurt (IPAC))
Black holes aren't supposed to make flashes of light. It's right there in the name: black holes.
Even when they slam into each other, the massive objects are supposed to be invisible to astronomers' traditional instruments. But when scientists detected a black hole collision last year, they also spotted a weird flash from the crash.
On May 21, 2019, Earth's gravitational wave detectors caught the signal of a pair of massive objects colliding, sending ripples cascading through spacetime. Later, an observatory called the Zwicky Transient Facility (ZTF) caught a blast of light. As scientists looked at the two signals, they realized both came from the same patch of sky, and researchers started wondering whether they had spotted the rare visible black hole collision.
Posted by Aloyzio Achutti at 9:39 AM No comments:

Aloyzio Achutti
@aachutti
·
1m
“Give someone enough time to process what they’re reading, and they’re more likely to believe the truth… But time is an increasingly rare commodity.” — Eric Ravenscraft

Our Ability to Process Information Is Reaching a Critical Limit
The result feels like a mental DDoS attack
ezero.medium.com
Posted by Aloyzio Achutti at 9:35 AM No comments: