Commentaries are personal reflections on topics relevant to cardiovascular disease prevention contributed by members of ProCor's global community.
-------------------
Between 2001 and 2004, several papers were published internationally, strongly suggesting an imminent dislocation of the CVD epidemic from developed to developing countries. The quotations below reproduce some of these "epidemic alerts," usually made as an introductory remark to an immediate call for action, aimed to "prevent" that anticipated disaster through widespread public health interventions in our countries./.../
Posted by Aloyzio Achutti at 10:09 PM No comments:

Red Wine in a Stent

For nearly three decades, the Nobel Prize-winning economist Robert W. Fogel and a small clutch of colleagues have assiduously researched what the size and shape of the human body say about economic and social changes throughout history, and vice versa. Their research has spawned not only a new branch of historical study but also a provocative theory that technology has sped human evolution in an unprecedented way during the past century/.../

How Food Explains the World


From China's strategic pork reserve to a future where insects are the new white meat, 10 reasons we really are what we eat.

They say you are what you eat. And that applies to countries and cultures as much as individuals. The food in our mouths defines us in far more fundamental and visceral terms than the gas in our tanks or the lines on a map. So it's not surprising that the most important questions of global politics often boil down to: What should we eat?

The New Geopolitics of Food
By Lester R. Brown

Street Eats
An FP Slide Show
The Strategic Pork Reserve
China is a porcine superpower as well as a human one. The Middle Kingdom boasts more than 446 million pigs -- one for every three Chinese people and more than the next 43 countries combined. So when there's a major disruption in the pork supply it hits the economy hard; the "blue-ear pig" disease that forced Chinese farmers to slaughter millions of pigs in 2008, for example, drove the country's inflation rate to its highest level in a decade.
To prevent further disruptions, the Chinese government established a strategic pork reserve shortly afterward, keeping icy warehouses around the country stocked with frozen pork that can be released during times of shortage. The government was forced to add to the reserve -- taking pigs off the market -- in the spring of 2010 when a glut led to prices collapsing./.../
PETER PARKS/AFP/Getty Images
Posted by Aloyzio Achutti at 9:24 AM No comments:

* Respondents were entered into a sweepstakes to win a $50 American Express gift card - issued to 100 physicians. Demographic/attitudinal weighting not applied to tabulation
Posted by Aloyzio Achutti at 3:32 PM No comments:

But caregivers can take various steps to protect their health, says Rebecca Axline, a clinical social worker at the Nantz National Alzheimer Center in Houston.WEDNESDAY, April 27 (HealthDay News) -- The growing number of people with Alzheimer's disease in the United States means that more people are becoming caregivers, a responsibility that health experts warn can pose risks to body and mind.
To keep stress in check, for instance, she emphasizes the need to find time and ways to reenergize, to keep meaningful things in your life and to remain social and participate in your favorite activities.
Axline also offered communication techniques that can help reduce caregivers' stress and frustration:/.../
Posted by Aloyzio Achutti at 1:14 PM No comments:

Reproduced with the permission of the WHO – Tobacco Free Initiative, Geneva, Switzerland.
Posted by Aloyzio Achutti at 10:54 AM No comments:

The Global Status Report on Noncommunicable Diseases 2010 is the first report on the worldwide epidemic of cardiovascular diseases, cancer, diabetes and chronic respiratory diseases, along with their risk factors and determinants.
Non-communicable diseases killed tens of millions of people in 2008, and a large proportion of these deaths occurred before the age of 60, so during the most productive period of life. The magnitude of these diseases continues to rise, especially in low- and middle-income countries./.../
Posted by Aloyzio Achutti at 8:21 AM No comments:

US: The 10 Most Prescribed Drugs

Daniel J. DeNoon
April 20, 2011 — The 10 most prescribed drugs in the U.S. aren't the drugs on which we spend the most, according to a report from the IMS Institute for Healthcare Informatics.
The institute is the public face of IMS, a pharmaceutical market intelligence firm. Its latest report provides a wealth of data on U.S. prescription drug use.
Continuing a major trend, IMS finds that 78% of the nearly 4 billion U.S. prescriptions written in 2010 were for generic drugs (both unbranded and those still sold under a brand name). In order of number of prescriptions written in 2010, the 10 most-prescribed drugs in the U.S. are:
The 10 Best-Selling Drugs
It shouldn't be a surprise that these generic drugs are not the ones bringing in the big bucks for pharmaceutical companies. The drugs on which we spend the most money are those that are still new enough to be protected against generic competition.
The IMS reports that Americans spent $307 billion on prescription drugs in 2010. The 10 drugs on which we spent the most were:
U.S. Prescription Drug Use: 2010 Factoids
Who's paying for all these drugs? Commercial insurance helped pay for 63% of prescriptions, down from 66% five years ago. Federal government spending through Medicare Part D covered 22% of prescriptions.
For Americans covered by insurance, Medicare, or Medicaid, the average co-payment for a prescription was $10.73 -- down a bit from 2009 due to increased use of generic drugs. The average co-payment for branded drugs for which generic alternatives were available jumped 6% to $22.73.
Other facts from the 2010 IMS report:
SOURCE:
IMS Institute for Healthcare Informatics: "The Use of Medicines in the United States: Review of 2010," April 2011.
Posted by Aloyzio Achutti at 12:37 AM No comments:

A May 1986 aerial photo of the damaged reactor at the Chernobyl nuclear power plant
Vladimir Repik / AP
The 18.5-mile (30 km) radius around the Chernobyl nuclear power plant is known officially as the "zone of alienation." Abandoned cars, tractors, buildings and homes litter the landscape and are slowly being devoured by trees and shrubs. A classroom bulletin board not far from the central Lenin Street in the town where the plant workers used to live reads, "No return. Farewell, Prypyat, April 28, 1986."
Read more: http://www.time.com/time/health/article/0,8599,2067562,00.html#ixzz1Kde4Kp00/.../
Posted by Aloyzio Achutti at 11:14 AM No comments:

Trans Fat in Dairy and Beef Not Benign

The Science of Why We Don't Believe Science 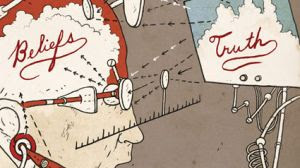 Illustration: Jonathon Rosen
How our brains fool us on climate, creationism, and the vaccine-autism link.
— By Chris Mooney

Read also: Kate Sheppard on the smear campaign behind Climategate.
"A MAN WITH A CONVICTION is a hard man to change. Tell him you disagree and he turns away. Show him facts or figures and he questions your sources. Appeal to logic and he fails to see your point." So wrote the celebrated Stanford University psychologist Leon Festinger(PDF), in a passage that might have been referring to climate change denial—the persistent rejection, on the part of so many Americans today, of what we know about global warming and its human causes. But it was too early for that—this was the 1950s—and Festinger was actually describing a famous case study in psychology./.../
Posted by Aloyzio Achutti at 11:27 AM No comments: